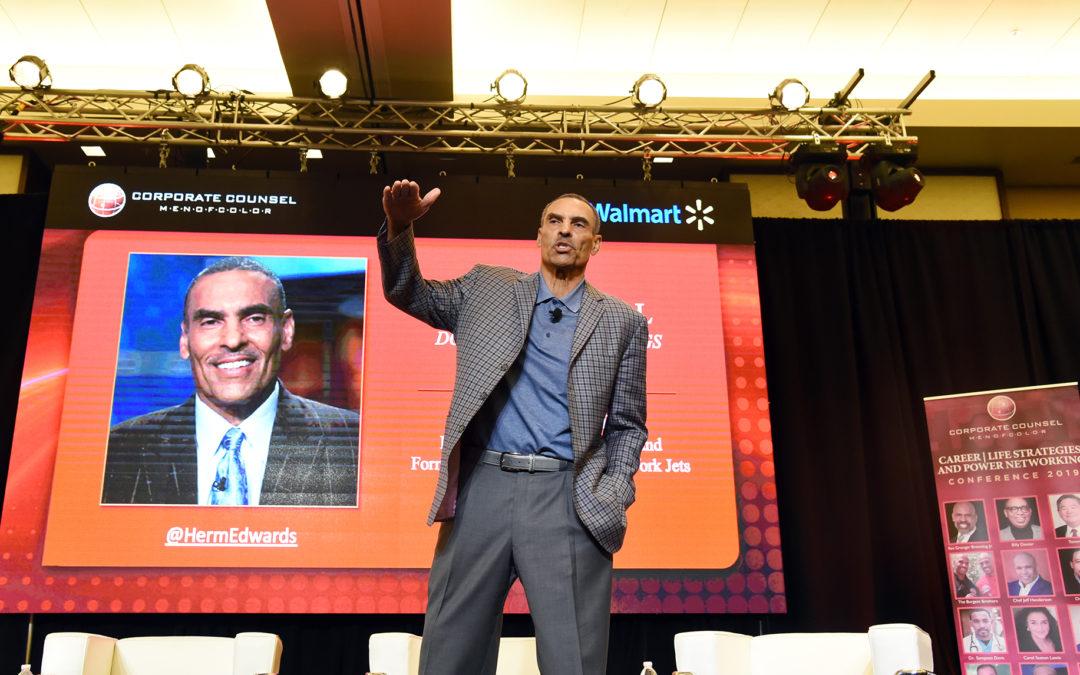 This past Friday, June 7, 2019, the Corporate Counsel Men of Color held its second Life and Strategies and Power Networking Conference at the Marriott Marquis in Washington, D.C. The event featured several well-known and renowned motivational speakers. One of those speakers was current Arizona State University football head coach, Herm Edwards. Prior to becoming the head coach of Arizona State University, Edwards was renowned for his years of playing and coaching in the NFL, which included head coaching the New York Jets and Kansas City Chiefs. Moreover, Edwards spent nine years as an analyst for ESPN. Furthermore, Edwards is revered for his speeches that display “hermisms” and motivate both players and fans alike. For this year’s conference, Edwards made sure to bring his “hermisms” with him when addressing conference attendees, totaling 600 men of color.

Edwards’s speech followed a format focused on six main points. The first main point of his speech was Promise where he discussed how promise should be an example of equality. Everyone needs a level playing field, and each person should be reminded that he is as capable as the person beside him. Edwards promises parents of football players that their children will be better when they leave Arizona State than they were when entering under his leadership.

The second main point of Edwards’s speech was Leadership. To Edwards, leading is much more complex than just being the example. In order to lead, one must have the ability to give others hope. One must be dedicated to serving others. One must be able to exhibit consistency. Those are three of the main factors that can help determine who and what a leader is. A leader must act from facts and knowledge, not from emotions.

The third main point of Edwards’s speech was Vision. The idea of vision was that one must follow the path that only he can set for himself. The speech emphasized that each person is the most responsible for how his life will take place based on what he has seen and set in his mind.

The fourth main point of Edwards’s speech was Huddle. Huddling is all about persons’ having the confidence to bet on their own abilities to get the task at hand completed. Moreover, huddling is a testament to the importance of commitment. Nothing can be accomplished when someone isn’t completely committed to completing a task.

The fifth main point of Edwards’s speech was the Game Plan. The Game Plan is all about a person’s being the best professional he can be along with knowing his personnel. Performers must always be able to stay calm and respectful in order to be the best professionals. Moreover, they must be surrounded with the best people and resources they can find that will complement them and assist in achieving the goal. In other words, the game plan is to be productive.

The last point of Edwards’s speech was a play on his famous “You Play to Win the Game” quote. This point emphasized the importance of integrity and legacy. Edwards stressed to the audience that they should never compromise their integrity no matter what and always be mindful of how they would like to be remembered when they finish the game.

When Edwards finished his speech, he received resounding applause and a standing ovation. The attendees loved it! Following his speech, Edwards was met with a swarm of fans wishing to take a picture with the famous coach. Every person who wanted a picture with him was able to have their wish granted. It truly was a fantastic speech and highlight of the conference.