What the Government Shutdown Reveals About Us 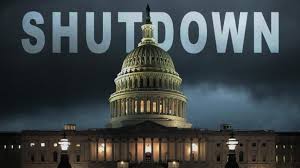 With the government shutdown in our rear view mirror, it’s a good idea to identify the elephant in the room.  Instead of saving at a level that can make work optional, retailers are delighted to see that Americans have embraced the mantra, ‘Spend, baby spend!”  As I have stated on nationally syndicated TV and radio programs, our habit of spending is terrific for executive bonuses, stock prices, and company profits, but it does not work when the income stops and the spending continues.

The day after Christmas 2018 the DOW rocketed over 1,000 points, more than likely based on positive holiday sales data, as noted by Dent Research, December 28, 2018. The other side of that coin is that many shoppers purchased with credit as opposed to cash.  Later the same day, the Richmond Fed reported a steep drop in its manufacturing index, while consumer confidence fell more than expected.

Today these government employees owe a total of $438 million per month in mortgage and rental payments, according to Zillow.  Which makes for an average of approximately $604 per month for each federal employee.    Excluding benefits the average federal salary is about $85,000 per year or about $7,000 per month submits former OMB Director, David Stockman. Stockman put things in perspective with this observation, “Indeed, the rot at America’s economic foundation is almost completely invisible.”

Stockman went on to say, “Half of U.S. households have no ‘rainy day’ funds.  Fifty percent of tax filers earn under $40,000 per year.  And even many of the labor aristocrats have no financial cushion.  They live paycheck to paycheck on monthly dispensations from Uncles Sam, as the case may be. How in the world can the U.S. economy be described as ‘strong?’  Yet the minutes from the last seven meetings of the Federal Open Market Committee show that ‘strong,’ ‘stronger,’ and ‘strongly’ were used between 24 and 32 times per meeting.”

“It is everywhere a problem of delusion and debt.”  – David Stockman

As of January 24, 2019, the U.S. net debt outstanding stands at $21.957 trillion.  Which is up from $20.679 trillion just one year ago.  Stockman said, “There’s no ‘supply side miracle’ happening, as federal tax receipts are plunging despite that Trump ‘stimulus.’” Now before we start pointing fingers at our leaders let’s take a look at household debt.  Stockman asserts, “Household debt now stands at $15.6 trillion.  It’s actually up by $1.4 trillion from the fourth quarter of 2007.”

So we are all in this together and no one gets a pass.  If you don’t save for yourself, who is going to do it for you?  It’s a new year.  And it’s time for a different approach.  “For the last quarter century, the American personal savings rate has usually been below 10 percent, and often below 5 percent. In the aggregate, most Americans simply don’t save enough. This is quite aside from any misfortune they might encounter or hardship they might have inflicted on them — and federal employees certainly suffered from both,” wrote Tyler Cowen at Bloomberg, January 28, 2019.

If you lost your income for a month or two you would make adjustments.  Rather than wait for something like that to happen to you out of the blue, get to the point where you spend 80% of what you earn and save 20% for tomorrow.  Bloomberg observed, “Indeed a higher savings rate is possible, and not just for the wealthy. Most Mormons in the U.S., for example, manage to tithe at least 10 percent of their incomes. This suggests it is possible to curtail one’s consumption without losing the best things in life. Mormons also tend to have especially large families, making tithing all the more difficult. If Mormons can tithe so much, is it so impossible for the rest of us, including government employees, to save more?”

In the same article we find, “In China, where per-capita income is closer to that of Mexico than the U.S., household savings rates are often well over 30 percent. One reason for this may be that the Chinese know their economic futures might be extremely volatile, and thus they hold funds in reserve.”

Complacency is a luxury Americans cannot afford. Start with your very next paycheck by setting aside 5 per cent of your gross income.  Notice how you don’t feel any pain at all.  But even if the savings level becomes painful you know you are preparing for the unforeseen in 2019 and beyond.